The future predicted by Huxley is a dystopia where systematic control of thought and behaviour are conducted through genetic engineering, biological conditioning and predestined genetic stratification. All these processes are carried out using highly advanced biotechnology in the ‘Central London Hatchery and Conditioning Centre’. Seven key processes occur in this hatchery to produce obedient, efficient and happy citizens.

STEP 1 : COLLECTION OF REPRODUCTIVE MATERIAL
The first step involved is acquiring the necessary tools to produce an embryo – sperm and egg. In the futuristic society depicted by Huxley, the Hatchery obtains its sperm and egg through donations from the 30% of the citizens from each class that are left fertile. The volunteers who donate their reproductive cells are offered a 6 month bonus salary. Once collected the reproductive material is stored in separate incubators with insulated doors to ensure optimum temperature is achieved.  Ova are stored at 37 degrees and as sperm optimally function at a lower temperature, they are stored at 35 degrees. . Each egg is contained in a numbered test tube and is monitored for temperature, salinity and viscosity
.
STEP 2: FERTILISATION 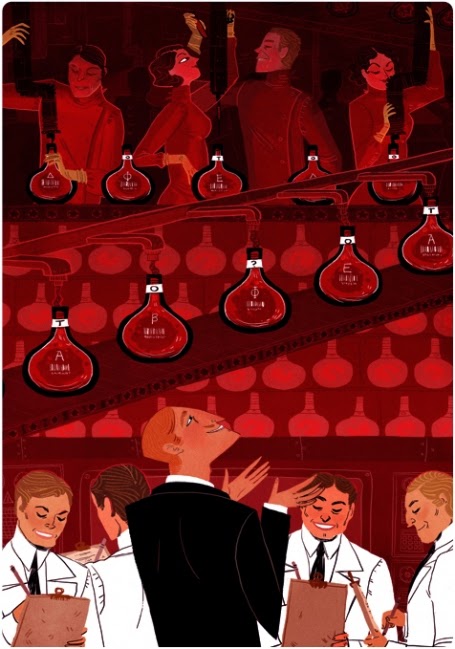 The next step in the process of reproduction is the fertilisation. This occurs in the fertilising room of the hatchery. The fertilising room contains 300 workers who carry out the process of artificial breeding.  In the fertilisation room the ova are removed from the incubators drained and checked for abnormalities. Once considered ready these eggs are counted and placed in a porous reptacle where they are suspended in a free swimming spermatozoa at a concentration of 100,000 cm3.  Upon successful fertilisation the eggs are placed back into the incubator.

Immediately after fertilisation, the process of stratification of embryos into different class begins.  The embryos of the Alpha and Beta classes remain in the incubator till the bottling process. Howe
ver Gamma, Delta and Epsilon embryos are removed 36 hours after being re-incubated to undergo the “Bokanovsky’s Process”. The Bokanovsky process involves one egg budding and proliferating up to 96 times to produce 96 identical healthy adults from one egg. The process takes up to eight minutes where the egg is exposed to harsh X rays , the eggs that survive are then chilled and dosed with alcohol to enhance budding.  The highest success rate is achieved when producing 72 clones.

All morula (including Alpha and Beta) are then transferred from the incubators to the bottling room where they are transferred to larger containers lined with peritoneum from pigs. This is
to imitate the abdominal cavity that lines all viscera . Once morula are placed in these lined containers, saline solution is poured in, the bottles are labelled with their date of fertilization, heredity, and of which Bokanovsky group they came from.

From the bottling room, the morula pass through the Social Predestination Room . (Little detail is provided in the novel about the events that take place in this room.

From the social predestination room embryos are transferred into the embryo store which is described as a a dark and red environment akin to mother’s womb. It is here that majority of the engineering of  embryos take place
The embryo store is designed to house a conveyer belt that is 2.04 km long which is travelling at 33.3km/h.  The bottles containing the embryos are placed on these belts. They spend 267 days here travelling 8m per day. Throughout their time in this room many modifications are carried out on these embryos.
-             At the end of each day, the embryo is shaken in order to familiarise them with the sensation of movement
-all the embryos are provided with essential hormones such as placentin , thyroxin ,corpus leutum  ,hog’s stomach extract and foetal foul’s liver to enhance growth
- At 112m (16 days)  centrifugal pumps are installed to create an artificial maternal circulation.
-At the 200 m mark (45 days) the gender is tested and the bottles are father labelled (T for males and F for females)
-70 % of the female embryos of all casts are given testosterone to sterilise them , the rest are left fertile in order to extract their eggs when they are fully developed for the production of the next generation of embryos.
- During the last 96m, doses of pituitary hormones are gradually increased
Apart from these processes other conditioning is carried out to ensure the embryos remain content with their pre-destined role in society.
-On the 40th day (320m) oxygen levels are modified depending on the cast of the embryo. Alpha and Beta embryo’s are given more oxygen. Lower cast embryos are deprived of oxygen by reducing the number of revolution on the centrifugal pump. This is done so as to restrict neurological development among the lower cast citizens. Readers are told that gamma, Delta and epsilon citizens have a lower IQ than alpha and beta citizens due to these modifications.
-Another key process carried out in the embryo store is the conditioning in order to facilitate the embryos in their pre-determined roles.  The developing foetuses are conditioned for example to have an improved sense of balance by increasing the amount of nutrients when being tipped upside down. These embryos then are enabled to work as rocket engineers where a sense of balance is key. Huxley provides other examples where foetuses destined to live in closer climates are provided nutrients when temperature is reduced during development.

Once development is complete, foetuses are “born” in the decanting room
.
STEP 7:  INFANT NURSERY

The final stage in the development of the foetuses is the c
onditioning that occurs in the nursery where these children are “raised”. Here children

are taught key social rules and regulation though powerful methods of conditioning and hypnopaedia. Delta children are taught to hate books and are electric shocked at the sight of them.  Alpha and Beta babies are taught moral lesson through hypnopaedia where they are told they  should be glad “ they are not gamma” and “everybody belongs to everybody”